OCONOMOWOC, Wis. – ORBIS Corporation, an international leader in reusable packaging, recently hosted the Osage City Chamber of Commerce for a facility tour and ribbon cutting event to celebrate the successful launch of new injection molding presses. The local business leaders were able to see the results of the investment, which improves the flexibility and overall output at this location.

This plant produces a variety of reusable and recyclable trays, baskets and totes for use in the food, beverage and consumer packaged goods industries. These products move goods throughout the supply chain to reduce damage, to better utilize truckloads and to reduce waste. This continues to support the modernization initiative started in 2017 with press replacements. In 2018, the facility continued the plan by significantly upgrading its plastic recycling systems. The upgrade allows for up to 40% of the plant materials to be supplied with recycled products that have reached the end of their service life. Since the expansion, ORBIS has added 25% more employees.

This plant employs about 100 people, is an active member in the community and supports local libraries and high schools with scholarship and robotic team funding. With the recent upgrades, the Osage City facility is well-positioned to provide ORBIS customers with high quality trays, totes and containers while being a key contributor to the local economy. 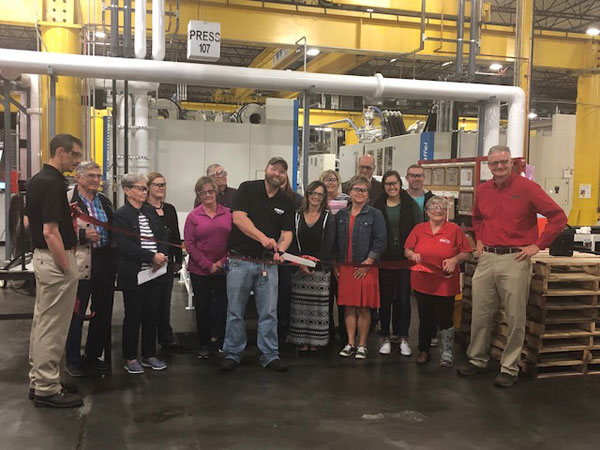 About ORBIS Corporation: With more than 170 years of material handling expertise and 65 years of plastics innovations, ORBIS consists of a portfolio of businesses that meet the material handling needs of companies across many industries. ORBIS helps world-class customers move their product faster, safer and more cost-effectively. Using a proven approach, ORBIS experts analyze customers’ systems, design a solution and execute a reusable packaging program for longer-term cost savings and sustainability. Using life-cycle assessments to compare reusable and single-use packaging, ORBIS also helps customers reduce their overall environmental impact. ORBIS is a part of Menasha Corporation, one of the oldest family-owned manufacturers in the United States. As a steward of sustainability, ORBIS is committed to a better world for future generations. For more information, please visit www.orbiscorporation.com, www.facebook.com/ORBISCorporation, www.twitter.com/orbiscorp or www.youtube.com/orbiscorp.

The Osage City Kiwanis Club supports the children of USD 420 with a number of service leadership programs (SLP’s) at the various schools. Faculty advisors who are also club members and other staff members provide invaluable guidance for the students in the high school, middle school and elementary school. The purpose is to promote service and leadership as integral parts of their education. It also introduces them to fundraising as a way to help provide funds for their activities and to support special events or organizations.

The Key Club is made up of high school students. Their activities include recycling miscellaneous papers/magazines each month, helping with the Kiwanis biscuits and gravy breakfast and supporting school and community activities. Imaginative club fundraising activities for a variety of causes and attending the Kiwanis Key Leader Conference are also a part of the Key Club experience. It’s not all work as fun activities are included.

Builders Club involves the middle school students. Some of their activities have included helping with the Kiwanis chili feed, recycling papers/magazines each month, reading to Kindergarten students, sponsoring a Student of the Week and other school and community activities. People have made note of the great help provided by the members. Some prolific fundraising projects have been a part of their activities.

The elementary school has the K-Kids program for 5th graders and they are an active bunch. Service projects include paper/magazine recycling once a month, helping the principal with morning duty, monitoring classes, recycling the lunchroom trash during lunch and campus cleanup which involves picking up trash in and around school property. Fundraising has included innovative ways of raising funds, Trick or Treat for UNICEF and food drives including non-perishable items for ECAT which have led to some astounding numbers of items collected. A back-to-school swim party each fall and the Christmas party are a couple of the fun events each year.

The BUG program  (Bringing Up Grades) is for the elementary students in the fourth and fifth grades. It helps promote the importance of obtaining and maintaining good grades as well as understanding the value of doing well in classes, completing homework, having a good attitude and exhibiting good behavior in school. Students who maintain or improve their grades and classroom presence are rewarded with a pizza party at the end of the first semester and a hot dog feed at the end of the school year.

In addition to the sponsored programs, OC Kiwanis funds other USD 420 activities such as scholarships for seniors, the elementary school’s W.A.T.C.H DOGS program, After Prom, Key Leader, the booster club and Teacher Appreciation Day. Kiwanis supports organizations such as the public library’s youth programs, ECAT, the warmth fund and the American Legion’s Boys State.

ECKAN has been awarded a generous grant which they are going to use for several areas of need that they support within their organization.

Program is to encourage monthly meetings with clients, meet their immediate emergency needs, and work together to encourage a savings account for clients with a 2/1 Match.  So they have a total of $1000 emergency fund.

Nutrition Class = Currently working with Cheryl Mussatto to offer a Nutrition class to clients, this money will be used to pay presenter fees, cost of food, incentives including (Chamber Bucks) for those who sign up and attend.

Budgeting Class=Working with HCCI to offer the following classes:

One-hour class for individuals who need an unbiased view of the different banking options that are currently available to consumers.  Learn:

So Much Debt, So Little Time

Feeling overwhelmed by past-due notices or plagued with garnishments?  Learn:

Osage City High School is beginning a new class that will include the development of partnerships with businesses to do job shadowing and/or possible internships.  This class is just getting established, but will be designed to expose students to jobs that they are interested in pursuing for careers.  We are interested in hearing from any businesses in town interested in working with the school to provide this type of partnership.  This could  include but is not limited to business aspects such as supply, purchasing, marketing, medical, programming, processing,  financial, etc. 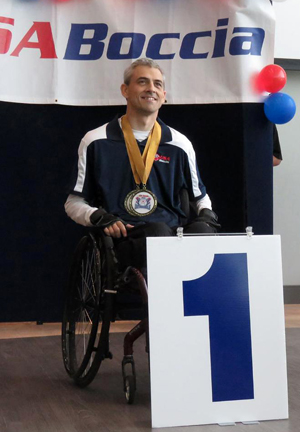 Adam Burnett, Osage City Chamber of Commerce member and employee of Resource Center for Independent Living, is not only busy at work, he also is active participating in the sport of boccia. He has been very successful in recent competitions at the national level.

Burnett, originally of Melvern and now Osage City, has worked at RCIL, in Osage City, since 2002. He was introduced to the Paralympic sport of boccia in 2016. Boccia is a throwing sport that tests an athlete’s coordination, accuracy, concentration, and ability to strategize. It can be played in a team or pair or individual competition.

What started out for Burnett as playing “just for fun” became more serious following a third place finish at the U.S. national tournament in 2016. He was then selected to Team USA in 2017 and represented the United States in two international tournaments that year, first in Montreal, Quebec, and then in Cali, Colombia.

Burnett won gold at the US National Tournament in 2017, but he is most proud of being a member of the first BC4 pair to ever win an international match for the United States, when he and his partner defeated Argentina last summer in Colombia.

“It’s really exciting and an honor to wear the Team USA gear and represent my local communities when we travel and compete,” Burnett said.

Most recently, he participated in Montreal in April 2018, and won his second national championship on July 1, 2018, in Chicago, Ill.

He said he loves the challenge of the sport and credits his wife, Beth, for holding him accountable and pushing him to continue practicing and improving his skills. Burnett said he also thanks USD 420 and Osage City Parks and Recreation for allowing him access to train.

“Thanks also to the Twin Lakes Cruisers, RCIL, and countless other individuals who have encouraged me and helped support my efforts,” he said.

Burnett’s ultimate goal is to help Team USA qualify for the 2024 or 2028 Paralympic games.

As of June 1, 2018, the Osage City Kiwanis will no longer pick up papers, magazines and shredded paper citywide on the last Saturday of each month. However, the club will continue its paper recycling program. With the advent of the city’s recycling program, the club has had two collection bins as part of that program. It has been decided to concentrate our efforts on the recycle bins located at the city’s maintenance yard, 9th and Main. The bins are available seven days a week, 24 hours a day.

Miscellaneous papers, magazine and shredded paper in a plastic bag remain the same acceptable paper items. We encourage you to use this method of paper recycling.

An Osage City Kiwanis sign is on the maintenance yard fence identifying our recycling program.

The two bins are marked papers, newspapers, etc. and are located immediately behind the sign.

We realize that some of our older patrons may find it difficult to come to the bins. For reasons of age, health or inability to get to the recycle bins, you may contact us at 785-528-2891 or 785-217-4586 whenever you have need for us to pick up your papers.

The dates have been set for the 2016 Osage County Fair. The fair will be held June 29 – July 2 in Osage City. This year’s fair will feature all the traditional favorites beginning with livestock shows and judging on Wednesday, the Chamber of Commerce parade, exhibits and competitions, a midway carnival, entertainment, Lions Club food concessions, and a grand finale fireworks display on Saturday night.

“The Osage County Fair will be an exciting community event with something for everyone,” said fair board president Jeff Pearson. He also emphasized that all Osage County residents are eligible to enter the open-class exhibits and competitions. Separate categories for both youth and adults include: horticulture and crops, gardening and flowers, livestock and animals, duct tape arts, recycling, baking and candy making, preserved foods, photography, quilts and clothing, fine arts and more. “So get creative and come to the fair!”

The three-day Advanced Practice Management Forum is offered to branch teams throughout the country who rank among the top third most successful in the firm in helping clients work toward their long-term financial goals.

“The Advanced Practice Management Forum gave us an opportunity to share ideas with other successful teams, visit with home-office experts to discuss ways to meet more clients’ needs, and view technical demonstrations highlighting a variety of systems and tools,” Williams said. “Mandi and I also were able to tailor some of the training to focus on areas of our business that we want to grow.”

“Attending this training together will help us better serve our clients,” Potter said. “We now share a clearer vision of the best practices, tools and resources to use in earning new clients, deepening relationships with existing clients and overall delivering an ideal client experience.”